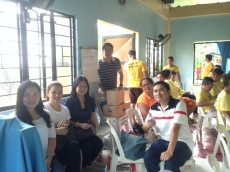 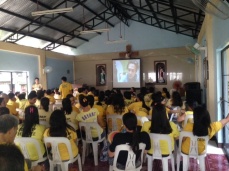 It was gloomy today as I got near the huge gray gates surrounded by equally tall walls. This barrier was well built to contain the people inside. Then as the steel doors opened, guards clad in black clothes stopped me for inspection. Upon getting clearance to move on, I walked a little further and I saw them… the people in yellow shirts… the prisoners.

I was within the premises of the Makati City Jail… and it was my first time inside a prison.

Why did I end up here? No, I did not commit any crime. Rather, I volunteered to serve the criminals here with my SYA friends from Santuario San Antonio Parish and the Prison Ministry.

Upon my first glimpse of the inmates, they were not locked up in their cells. Instead, they were inside a chapel attending a catholic mass during a Saturday afternoon. As I heard the word of God was being read, I entered and took a seat beside these dangerous people.

I have to admit that I didn’t feel at ease being around these lawbreakers… after all, they did something evil to be put behind bars. Did they rob an employee in a crowded mall? Did they rape a girl walking in a dark alley? Did they kill someone in broad daylight? Questions such as these filled my mind.

However as my eyes roamed around, I noticed that the physical features of these people varied greatly. Some were scrawny while others were brawny. There were males, females, gays and lesbians. A lot were Filipinos but some were foreigners. Most of them looked clean and did not stink.

What’s my point? At first glance, you wouldn’t know that they were criminals unless you see them inside this prison.

During the Holy Eucharist, I observed that the detainees were also the readers of the bible passages and some were members of the choir. All throughout the mass, they were well behaved as they listened carefully to the priest. Their actions showed their devotion to Jesus by solemnly praying and gleefully singing to honor Him.

After the concluding rites, an officer-in-charge ordered the male convicts to go outside the chapel. They moved out to gather as a group while the warden made a headcount.In contrast, a female officer tallied the women who were left behind. The detainee near me said that counting usually occurs every three hours. According to her, so far there have not been any attempts to escape among the regular attendees of the mass.

As the prisoners returned to their seats, my SYA friends and I gave them some popcorn and juice.We held a film showing entitled “Ekstra” starring Vilma Santos.

The movie revolves around the life of a bit player (ekstra) named Loida Malabanan who is a single mom that wants to provide a better future for her daughter. She is a professional bit player whose role is to be part of a crowd in most Filipino soap operas. The movie shows the numerous hardships that bit players undergo to earn a small amount of money.There are no changing rooms, no toilets and no sleeping beds that are provided for an “ekstra.”But as a whole, everyone involved in producing a telenovela has some sort of adversity to overcome even if he is a director or a staff.

The audience applauded and afterwards, my SYA friends started to distribute some soap to the detainees as they fell in line to return to their cells.

Since this was my first MCJ experience, I was astounded that the prisoners were calm all through out. There were no signs of greediness or rowdiness. I did not expect this orderliness from them. I always thought that the people inside this institution were war freaks. I was wrong.

So I asked the guy in yellow beside me, “Bakit hindi kayo magulo dito?” He smiled a bit and answered, “Hindi kami basta mga preso, kami ay pamilya.”

Thank you Father God for the opportunity to serve today. I was really glad to have spent my time with the prisoners. I am blessed to be part of the SYA Family.