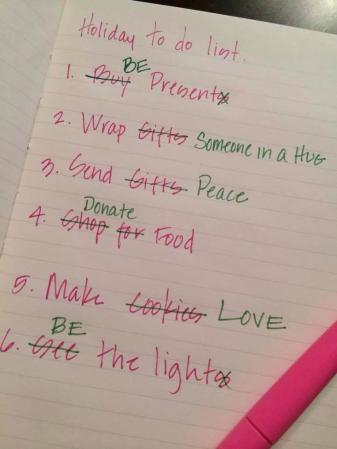 At a recent celebration of the Holy Eucharist, there was a new commentator who was visibly overtaken by nervousness. Instead of announcing that the Church was already on its first week of Advent, she stuttered, “Today, um, ah, hmm, we’re on the third week in Ordinary Time!” (Ordinary Time is made up of 34 weeks that focuses on the three years’ public ministry of Jesus, from his Baptism until his Passion, including Lent and Easter).

The lady next to me snorted, “Whoa! Woman, haven’t you seen the Christmas decors?” Come to think of it, many of us are also guilty of not knowing what the Christmas or Advent season is all about, although the most obvious, visual reminder of this season has already taken over our homes, with hype and hysteria.

Father Domie Guzman, SSP, remarked, “At the beginning of Advent, I greet every one a Happy New Year because it ushers a whole new Liturgical year in the Catholic Church.”

The word Liturgy was taken from the Greek word Leitourgos which means public works, a schedule of public celebrations, where we commemorate the story and life of Jesus during the entire year.

During the olden times, the early Christians had no celebration of Christmas because they were constantly on the run and being persecuted. They observed their religion clandestinely and everything was done hush-hush.

It was only in 313 A.D., during the reign of King Constantine that Christianity was permitted. All by virtue of Constantine’s mother, Queen Elena, who converted to Christianity. Constantine signed the Edict of Milan to treat Christians benevolently within the Roman Empire, enabling them to worship Christ out in the open.

The first two seasons introduced by the Church were Lent and Easter. It was in the season of Easter that made Sunday mass an obligation; it also means that for the Christians, the week always begins on a Sunday, to celebrate the rising of Christ.

It was in France where a 3rd season in the Liturgical calendar was introduced (aside from Lent and Easter). “If we prepare for Easter and Lent, why can’t we prepare a season for Christmas?” came the cry. Thus, the Christmas season was introduced, covering twelve days, exclusively from December 25th until January 6th. (Read: Twelve days of Christmas).

In order to calculate Lent, the French counted back 40 days from January 6th, thus November 11th (Feast of St. Martin of Tours). November 11th begins the observation of Lent, with fasting for 40 days, alms giving and other Lenten sacrifices.

MODERN ADVENT. In 590 A.D., Pope Gregory (a brilliant artist, musician and astronomer as well) changed the calendar. His argument: The rotation of the moon around the globe is 28 and ¼ day. He therefore adjusted the calendar by adding one day in February (Leap Year).

In fixing the calendar, Pope Gregory also fixed the liturgical calendar of the Church. He shortened the preparation time for Christmas from 40 days to 30 days.

The word Advent means Adventus Domini or the coming of God. “We are awaiting the coming of Jesus, the King.” during the season of Advent, the priest wears purple, the color of royalty, honoring Christ the King. This color is achieved by mixing red with a rare color of blue called indigo.

In 1833, a German Protestant pastor introduced the first Advent wreath. Green is the color of the wreath to signify the victory of winning the Olympic race. Now, green signifies the coming of the triumphant Christ.

Three purple candles (representing hope, peace, and love) and one pink candle (for the shepherds and joy) make up the candles used. One candle is lighted each week. Sometimes, a 5th candle in white or gold is placed in the center of the wreath to symbolize Christ.

Advent should serve as a beautiful, gentle reminder that Christ is the reason for the most wonderful time of the year spreading warmth in our homes and in our hearts.

About Letty and her other articles>>>