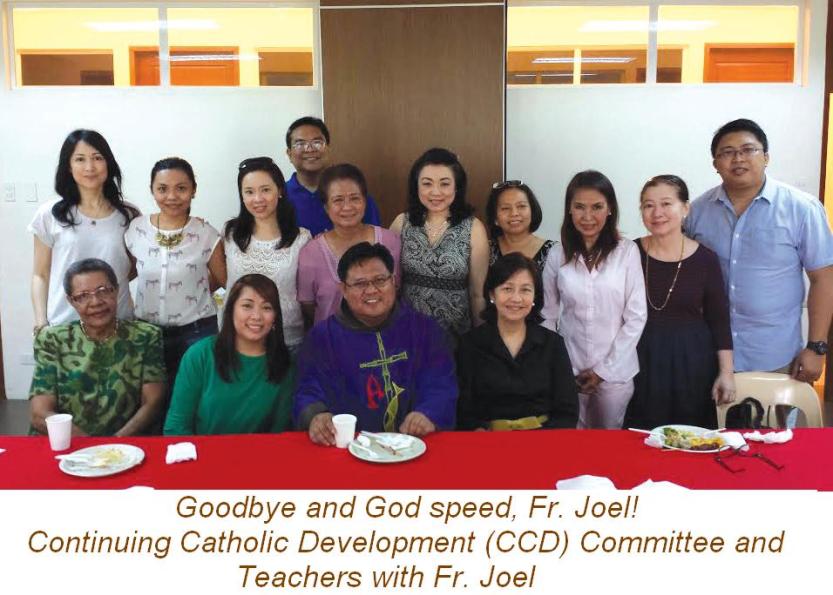 The ringing bells at the Parish Centre at 10.15am on Sunday, 6 April, heralded the end of classes; and the joyful shouts and laughter of children told their own story – the end of another school year at CCD (Continuing Catholic Development).

It was also the day of a very special time in CCD’s history, the last celebration of their usual year-end Thanksgiving Mass with Father Joel Sulse, OFM, presiding. With nostalgia and sadness and also with gladness and celebration, the CCD family – parents and students, friends and supporters and teachers and committee – filled all the bays in the Social Hall to bid farewell and best wishes to Father Joel, who would be leaving for Rome to pursue his studies for a doctorate in Divinity. For the past five years Father Joel was not only CCD’s Spiritual Advisor, but to many, he was also their Friend, their Confessor, their Mentor.

After his homily, Father Joel also bade farewell to his congregation. He said that the best memory of CCD with him was the certain and sure knowledge he has of the combined efforts of both the parents, and the teachers and the committee in ensuring that the children received the best formation and religious education available to them. He commended the teachers and the committee for their selfless and generous service to the Lord and to their community in implementing and sustaining one of the best CCD programs he is aware of; and his only request was that they continue.

In their tribute to Father Joel, CCD said that during his time and with his guidance and support, CCD has grown from strength to strength – its curriculum and work program were set and in place and the dramatic increase in the number of student population – not only in the returning students but incoming new students as well – were the most visible and tangible legacy from him.

Thank you and Goodbye Father Joel.