Dateline: SM Arena, May 18, 2013. Getting up with the pigeons was not easy but then eight thousand other sleepyheads did it to be at the liturgical Congress organized by the Archdiocese of Manila with the theme, Faith Celebrated and Lived.

There were three speakers:

His Eminence, Chito Cardinal Tagle began with a question: “What is a giveaway sign that you are growing old?” Answer: You always refer to the past as better than today. You love to retell your glorious past with comments like Mabuti pa noon or noong aming kabataan, etc. It was harking back at a life simple and serene.

Life indeed has become challenging and complicated especially for families plagued by migration and its harmful effects: Breakup of family depriving the children of parental care and guidance, loneliness, abuse, precious moments lost and guilt compensated by material goods.

However, if you peer past the gloom, there is a glimmer of light: Filipinos working overseas have unwittingly played a significant role in spreading and reviving the Catholic faith. Churches that were once closed have reopened and Filipinos have become a major influence for conversion and renewal of enthusiasm. It was proof that the Lord has not abandoned his children but has constantly opened opportunities to them. In an evolving world, the word of God has lost nothing of its value or brilliance.

While in the past, parents asserted their authority by skirting issues through an imperious stand – Basta! You obey – resulting in children complying but only out of fear or coercion, they grow up not fully convinced of their faith or religion. This too had to change. The youth must be inspired through a clear explanation of the teachings of Jesus that still resounds with the power: “Do not labor for the food which perishes, but for food which endures to eternal life.”

Reverend Father Genaro Diwa spoke of the reforms tackled by the Council of Vatican II held in Rome in 1962 during the papacy of Pope John XXIII. It addressed the relationship between the Roman Catholic Church and the modern world.

Time was when Holy Mass was celebrated in Latin. The priest had his back turned away from the faithful, driving home the point that he was the sole celebrant while everybody else was to remain passive and silent in their pews. Lay ministers were unheard of.

That was fifty years ago and Vatican II in the Sacrosanctum Concilium moved to change this through,

1) Active Participation of the Lay Community in the celebration of the Liturgy. It brought meaning and fulfillment below the pulpit as lay people were made to participate in the Liturgy making it relevant to their daily lives.

Active Participation is the gift of self – you are physically there! It becomes rooted in the expression of your interior faith, and its external manifestations.

But, how would this filter down to me? As a LecCom, when you stand in front of the community, make an effort to read audibly, clearly, and slowly, pausing if you must,so that the community hears, listens and is eventually moved by every word you read from God.

2) Use of the Vernacular Language. Latin was not the favored language. Other native tongues could equally express beauty in the worship of God. In fact, certain sentiments and feelings acquired a deeper meaning when spoken in the vernacular language.

Any language expressed in faith is heard by GOD.

3) In-Culturation. The diversity in forms and expressions from other culture and heritage also celebrate, worship and honor God. Their existence has been part of history and legacy, not something new or created only today.

H.E. the most Reverend Teodoro C. Bacani spoke on Faith and Liturgy drawing attention to the Mystery of Faith that we the faithful recite after the Offertory, Christ has died…has risen…will come again.

It is not a mystery because it is reality imbued with the presence of God. We believe because God revealed it and God being God always speaks the truth, never deceives, never lies. We therefore hold the word of God even if our reasoning is limited. We rely and put our trust in God. His word is indisputably true.

Obedience is part of faith. Whenever we pray, we extend an invitation to God to come into our lives in humble supplication, Tuloy po kayo Panginoon.

Although meditative prayer has its merits, there is value in connecting with our peers and our community through external manifestations, “The more we express our faith, the more it grows,” Bishop Bacani said.

He also enjoined all lay ministers to show(your faith), pray aloud, sing, praise,and burn with enthusiasm, including in the external act of paying forward, sharingand donating your blessings.

“Let us be responsible for one another because we believe that we belong to one family in Christ,” concluded Bishop Bacani.

To cap the Congress, Holy Mass was celebrated by H.E. Gaudencio Cardinal Rosales.His prayer rang loud for the Lord to increase our faith. Guide me, lead me, let my faith catch fire, deepen it, so that I may become a beacon of light to lead others to Christ. 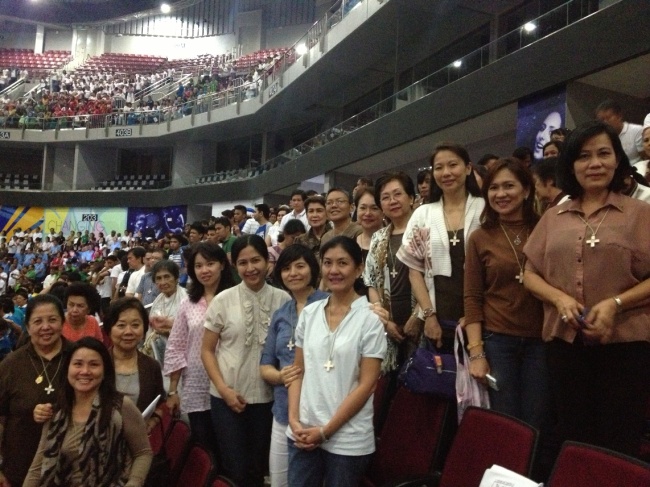 published on June 2, 2013, Parish Bulletin. Other articles written by Letty>>>>>