St. Anthony is alive and well in the Philippines! With the feast of Anthony of Padua approaching on June 13, it’s a good time to recall my February visits to two Franciscan churches in metro Manila. Both churches honor St. Anthony as their patron saint, and both are popular shrines. As we shall see, St. Anthony, who holds the Christ child in his arms, draws many people to Christ.

The St. Anthony Shrine in Sampaloc is featured first, not only because it was built before the second one (Santuario de San Antonio in Forbes Park), but also because the historical roots of the Sampaloc Shrine stretch back to a very old and venerable statue of St. Anthony that once stood inla Iglesia de San Francisco(the Church of St. Francis). This huge church, built of stone in 1739, is directly linked with the very first church built (in 1578) of bamboo and nipa by Spanish Franciscan friars shortly after they arrived in the Philippines. This large stone edifice, like its humble predecessor, stood in Intramuros, the old walled city of Manila. The large church, named after St. Francis, attracted many Catholics because of its very popular St. Anthony devotions and because of Anthony’s highly revered statue there. This massive stone structure, like many others in Intramuros, was totally destroyed by bombings at the end of World War II.

St. Anthony’s transfer to Sampaloc
In the eyes of some, it seemed miraculous that the statue of St. Anthony survived the bombings of 1945 and was found intact amidst the crumbled ruins of the church. The statue was taken for safe keeping to the Franciscan church in Santa Ana (featured in last month’s E-spirations), but was ultimately transferred to St. Anthony Shrine in Sampaloc. According to Father Cielo Almazon, O.F.M., present rector of the shrine, the old, venerable statue of St. Anthony thus came to be mounted on the wall behind the main altar of the Sampaloc shrine.

On February 12, Father Cielo graciously took me on a tour of the shrine and spoke of the amazing number of people that St. Anthony draws into that church each week. St. Anthony devotions are held each Tuesday. Father Cielo estimates that some 5,000 people (collectively) attend the 10 Masses on ordinary Tuesdays. The first Mass begins at 5:45 a.m. and the 10th at 7:30 p.m. During the solemn novena held on the 13 Tuesdays preceding the feast of Anthony, Father Cielo estimates that the number of people attending rises to 8,000 each of those Tuesdays, with as many as 200 people standing outside during these Masses. The Prayers to St. Anthony are said after the gospel/homily of the Mass. According to Father Cielo, “the popularity of St. Anthony helps draw the faithful to the celebration of the Eucharist, which is the center of Catholic prayer and worship.”

Father Cielo points out that the thousands who come to the shrine represent a wide range of people—poor and rich. “There are beggars and street vendors, as well as retired professionals, students and teachers. The shrine is surrounded by various schools and colleges,” he adds, “with a good number of people traveling to the shrine from remote places far beyond the metropolitan area.”

More about Father Cielo
Father Cielo is a 55-year-old native of Northern Luzon. He holds a licentiate in sacred scripture from the Pontifical Biblical Institute in Rome and has taught scripture for 23 years at Our Lady of the Angels Franciscan Seminary in Quezon City and at the Inter-Congregational Theological School in New Manila. Father Cielo told me that he would like to see “St. Anthony Shrine become a place for expanded evangelization projects—in light of St. Anthony’s own charism and success as a great evangelizer.”

Father Cielo says that he sees St. Anthony “as a powerful intercessor on behalf of both the rich and the poor. The rich come here and give thanks to St. Anthony because he made their business prosperous and their families happy. The poor pray to St. Anthony invoking his assistance to pass board exams and help cure their sicknesses, and to have children. Most of all, Anthony helps us become better followers of Christ. As a prayer in the shrine’s novena booklet expresses it: ‘O Holy St. Anthony… pray that we may fulfill the will of God and live the way Jesus shows us in the gospels.”

A brief history of the Franciscan presence in Sampaloc
The first Franciscan Church in Sampaloc was Our Lady of Loreto, dedicated to Our Lady under that title in 1616. The pastor was Father Augustin de Tordecillas, one of the first 15 Franciscan friars to arrive in Manila from Spain. During the next 300 years, the church of Our Lady of Loreto experienced many challenges: destruction by fire (1639) and by earthquake (1880), though it was rebuilt in both instances—only to be abandoned because of the Philippine revolution (1896-98) and legal disputes that followed. Our Franciscan presence in Sampaloc survived at times only through the presence of Third Order Franciscans and their well-known VOT (Third Order) Church, located nearby. Today the Third Order of St. Francis is known as the Secular Franciscan Order (SFO). 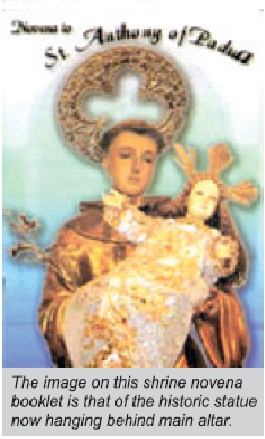 Near the end of World War II (1945), the Franciscan friary and the VOT Church in Sampaloc, as well as many other buildings in Manila, were totally destroyed by bombings of the U.S. armed forces (to eliminate the hideouts of the Japanese occupiers). As noted earlier, the destruction included the old Church of St. Francis in Intramuros, as well as many others within those same old walls.

Not long afterwards, Father Mariano Montero, O.F.M., a Spanish friar once stationed at St. Francis Church in Intramuros, came up with the idea of transferring St. Anthony devotions (so popular in Intramuros) to Sampaloc, where the rebuilding of Sampaloc’s destroyed church was about to begin. Father Mariano decided to have the church’s name changed to the Shrine of St. Anthony. Finally, in 1947, the rebuilding of the church was completed and it was rededicated to St. Anthony of Padua.