Early Life
The patron saint of Switzerland was named Von Flue because he was born and lived for most of his life on the Flueli, a fertile plain of the Flueli River near Sachsein, Obwalden (Unterwalden) Canton, Switzerland.

He was born on March 21, 1417 to a highly respected peasant couple: his father Henry who held a civil position in the community and Emma Roberto, his devout mother who brought him up as a lover of the spiritual life. She and her two sons were members of a Catholic lay association, a group that fostered daily prayer and meditation on the passion of Christ so as to form a specially close relationship with God.

From childhood he was remarkable not only for his piety and sound common sense but for his love of peace. However at age 22 in spite of his peace-loving disposition, patriotism led him to be a soldier once in the war with Zurich and then fourteen years later he again fought for his canton – this time as captain.

Marriage
But at the age 30 he married a likewise religious-minded girl name Dorothea Wissling who bore him 10 children in their happily married life. This is why Nicholas is also regarded as a patron of large families. 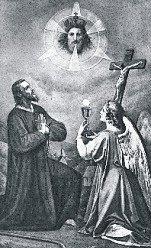 Because he was highly regarded as a person of complete moral integrity he was held in such high esteem that during the years that followed he served as magistrate, judge, member of the assembly and councillor – all the while consistently refusing the position of being a governor.

While taking part in the civil and political life of his country he continued his devout practices from his youth in spending whole nights in prayer and rigorous fasting.

Becomes a Hermit
Unfortunately for Nicholas who loved peace, peace of mind seemed to elude him. So in 1465 he decided to withdraw from politics. Two years later after twenty years of married life he received in a vision of the Blessed Trinity what seemed to him to be a call from God to abandon the world completely and spend the entire rest of his life for Him as a hermit.

This he did with the consent of his loving wife and children. So in 1467 he settled in a hermitage in Ranft just a few miles from his home. Soon the people of Obwalden who called him “Brother Klaus” built him a little cell with a chapel attached to it which made him so happy because now he could help serve the mass. It was here in this peaceful haven that he happily spent the remaining 19 years of his life.

He followed a rigid daily schedule as follows: from midnight to midday was spent in prayer and contemplation; afternoons were reserved for the people who came seeking his counsel and advice.

While surprisingly Nicholas could neither read nor write merely using a special seal for his signature he was held in the highest esteem because of his holiness and god-given gift of the spirit of wisdom and counsel and natural good judgment. So people from all walks of life and economic status including kings and high officials came in droves to his cell seeking his wise counsel to solve their problems whether petty of international consequence.

Claim to Fame
In 1481 after the cantos had finally gained their independence by defeating their German king, Charles the bold, a huge disagreement arose between the cantons that posed a threat of a civil war that would affect their new found unity and independence. The argument disagreed upon by the representatives of the cantons at the meeting at Stans was whether to expand their present confederation and include the cantos of Fribourg and Soleure or not.

At an impasse they decided to consult Brother Klaus, who had come to be regarded as the wisest man in Switzerland. Working though the night Nicholas presented them with a set of proposals. Within just an hour after being given the proposal to consider they finally all agreed to admit Fribourg and Soleure into the Confederation. Switzerland had been saved from a disastrous civil war! That date was December 22, 1481 and it marked the foundation of modern united Switzerland.

The whole country could not praise or reward Bruder Klaus (as he was affectionately called) enough.

His Death and Canonization
Nicholas suffered his last illness on his 70th birthday just six days after the Council of Stans and after 8 days of painful suffering which he bore with perfect resignation.

This great saint and Father of his country was canonized by Pope Pius XII on 15 May 1947.

This outstanding religious figure in Swiss history died on March 21 in his cell at Ranft which is today a recognized place of pilgrimage.

Because of his holiness and wisdom this great Christian is honoured by Swiss Protestants and venerated by Swiss Catholics.

His Uniqueness
Still existing today is the incredible belief that he solely existed on the Holy Eucharist (the wafer biscuit given at communion) as early in life he had developed some rare gastric ailment that didn’t allow his digestive system any drink or food.