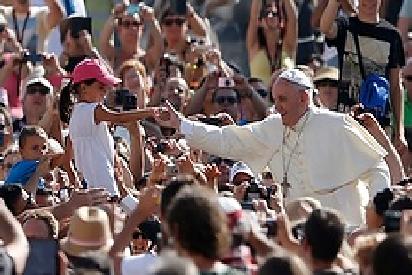 Envy, jealousy and meanness are human instincts, but they are not Christian, since the division they cause among believers is the work of the devil, Pope Francis said.

“Instead, God wants us to grow in the ability to come together, forgive each other and love each other in order to be ever more like him,” he said at his weekly general audience Aug. 27.

A strong breeze and temperatures around 80 degrees made it possible to move the weekly event from the indoor air-conditioned Vatican audience hall to St. Peter’s Square, where more than 12,000 people gathered for the pope’s catechesis and blessing.

The Creed describes the Catholic Church as being “one and holy,” the pope said, yet its members are sinners, who “experience, every day, their own fragility and wretchedness.”

“That’s why this faith we profess impels us toward conversion, to have the courage to live in unity and holiness every day,” he said.

“If we are not united, if we are not holy, it’s because we are not being faithful to Jesus,” who is the source of all unity and holiness, the pope said.

Divisions are manifested not only in schisms or major rifts among Christians; they also frequently occur on the local level, as “parochial sins,” in Catholic parishes, schools, communities and organizations, Pope Francis said.

“Sometimes, in fact, our parishes, which are called to be places of sharing and communion, are sadly marked by envy, jealousy, resentment.”

“This is human, but it is not Christian!” the pope said.

“How much gossip (goes on) in parishes,” the pope lamented. “We mustn’t do it! I won’t tell you to cut off your tongue. No. Not that. But do ask the Lord for the grace to not do it, all right?”

The refusal to gossip, in fact, is such an outstanding Christian virtue, it should make a person a saint overnight, the pope said.

He recalled the sterling reputation of an elderly woman who used to work in a parish in his former Archdiocese of Buenos Aires, Argentina.

People remembered her as someone who “‘never talked badly of others, never gossiped, was always with a smile.’ A woman like that can be canonized tomorrow! This is beautiful, this is a great example,” he said to applause.

Conflict arises when people judge others; look only at others’ defects, not their gifts; give more weight to differences than common ground; make themselves the top priority; and follow their own ambitions and points of view, he added.

“In a Christian community, division is one of the gravest of sins because it turns it into a sign not of God’s work, but of the devil, who, by definition, separates, ruins relationships and instills prejudice.”

The pope asked people to examine their consciences and sincerely repent “for all the times in which we caused division or misunderstanding in our communities.”

He asked people pray for the grace to better reflect the “beautiful and joyful” unity of Jesus and the Father, and the grace “to not talk badly about others, not criticize, not gossip, and to love each other.”

“This is the holiness of the church: in recognizing in each other the image of God,” who calls for continual conversion in everyone.

Despite the faults of his followers, “Jesus never leaves us by ourselves, he doesn’t abandon his church. He walks with us, understands us, our weaknesses, our sins and forgives us,” inspiring people to forgive each other, too.